The film surprises us by revealing just how far we have NOT come; women have still not achieved parity in pay, position, and power, and while shoulder pads have made only a minimal comeback, most bosses remain white men. The film, however, is downright prescient in its brilliant comedic channeling of the central dilemma still faced by women leaning in and trying to have it all.

“Baby Boom” stars Diane Keaton as J.C. Wiatt, known as “The Tiger Lady,” a high-powered Manhattan career gal living with her equally high powered investment banker boyfriend (the late, great Harold Ramis). Together, they live their lifestyle among modern art and four-minute sexual interludes, as they climb the ladder of urban success.

So, imagine the hilarity when The Tiger Lady, in between appointments and on the verge of a promotion, is suddenly handed a toddler whom she’s “inherited” from a dead relative! J.C. is thrown into a tailspin, loses her focus, breaks up with her boyfriend, and quits the job after she’s undercut by her upstart protégé in the person of the young James Spader, who even then had that diabolical gleam in his eye, but has since left behind that full head of blonde hair. 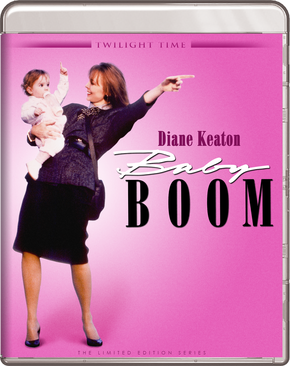 J.C. chucks it all and begins Act II of this fable in a gorgeous 62-acre spread with apple orchards, and meets the only available guy in town the handsome, soft-spoken but manly local veterinarian, played by a Gary-Cooperesque Sam Shepard. Oh, and she also invents a baby food recipe that appeals to the yuppie tourists whom she now sees more clearly, and in a feat of marketing genius, turns into a huge business success on her own terms!

Most critics, among them Roger Ebert, observed that the film is a “too good to be true … escapist fantasy.” I wrote that the movie is a thinly disguised take on two myths: Sleeping beauty and “I Love Lucy.” That she’s literally kissed awake by the handsomest guy in town would not be PC today.

Co-writer/director Charles Shyer remembers that while “the screenplay sold overnight for a million dollars—a lot of money back then, (the studio) didn’t want Diane …They wanted Goldie … Bette Midler… Cher.” Luckily, Meyers and Shyer won out and Keaton went on to give yet another great comedic performance directly descended from “Annie Hall,” but with great swagger and a translucent vulnerability playing across her wide-eyed innocent face.

Keaton is clearly in the mold of the iconic comedic actresses Shyer admires: “I love those women like Carole Lombard, Irene Dunne … Rosalind Russell … they were strong, they were smart, they were feisty, they were great lookin’, they just had everything. A lot of times, smarter than the guys.” 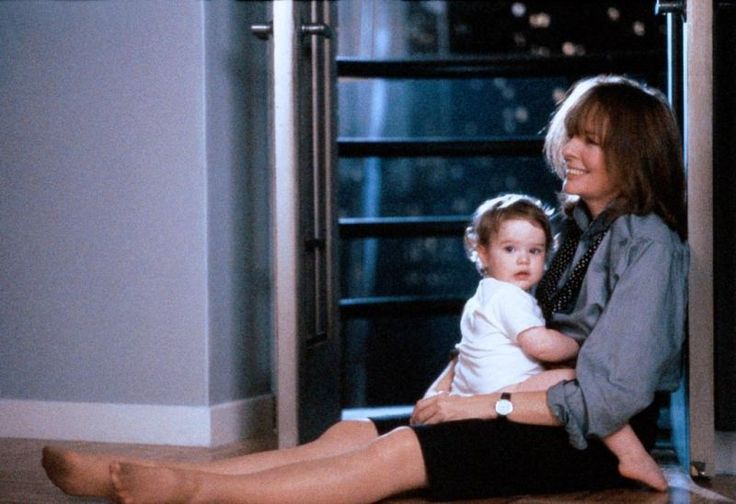 What holds this film together then and now is Keaton’s virtuoso spontaneity and transparency. Shyer said the actress “loved the unpredictability of the babies,” twin toddlers Kristina and Michelle Kennedy, one of whom apparently “liked being in the movie and the other one loathed it.” In one scene, Keaton carries the baby into the Hotel Pierre in a unique manner. Apparently, when the child began to twist in Keaton’s arms (“we didn’t plan on that and she just ran with that”), the actress chose to just carry the child in upside down almost like a suitcase and palm her off at the coat check.

As for transparency, Keaton’s facial expressions and leg twitching under the table reveal her every frailty—every nuance of conflict, agitation, second guessing, and bucking herself up; she and we are utterly aware of her having to present a certain image in order to be successful in a man’s world. Keaton shows us all the strings she’s pulling and we’re transfixed by her openness. Later, in one of the all-time great screen meltdowns, she lets loose a volcano of frustration when the well on her Vermont estate runs dry and she’s stranded on the rural/urban divide.

She will not only survive and thrive, but do it way too easily, with little heartache and a lot of terrific interior design, in a film where everyone is lily white, all midwesterners are sexist religious fanatics, and nannies are either Nazis or nymphos.

But J.C. Wiatt’s declaration at the end of the film about making it on her own terms rings true, is different from where she began, and remains relevant today. She does not need to impersonate a man and “shoulder” the world the same way. Her boss (Sam Wanamaker) says earlier in the film, “You know I don’t think of you as a woman.” But by the end of the film, she realizes this is no compliment; women are not men, nor do they have to be. And furthermore, there’s a continuum of choices out there, and maybe her new guy will even help. Shyer speculated that if “Diane and Sam Shepherd … ended up getting married I think he would have taken care of the baby as much as her … I think he was an evolved guy.”

In the meantime, “Baby Boom” lets us revel in the fantasy of having it all, never fooling us for a moment that it is such a fantasy, and reminding us how far we still have to go; at least we’re no longer lugging those shoulder pads.

To get the Limited Edition Twilight Time Blu-ray of “Baby Boom” with audio commentary and original theatrical trailer, click here.